CREATE A WILL TO EXCEL

Build a Culture of Excellence, soar to new heights and
positively affect your bottom line.

A GROUP DOES NOT CONSTITUTE A TEAM

ACHIEVING EXCELLENCE IN A FAST CHANGING AND TURBULENT ENVIRONMENT!

Master change and fly ahead or be stuck at the gate and fall further behind.

Integrity and Excellence are the jet fuel for winning organizations.

Build your own "Culture of Excellence" by following and applying the P4 System (Principles, People, Flight Plan, and Performance) to reach extraordinary heights. 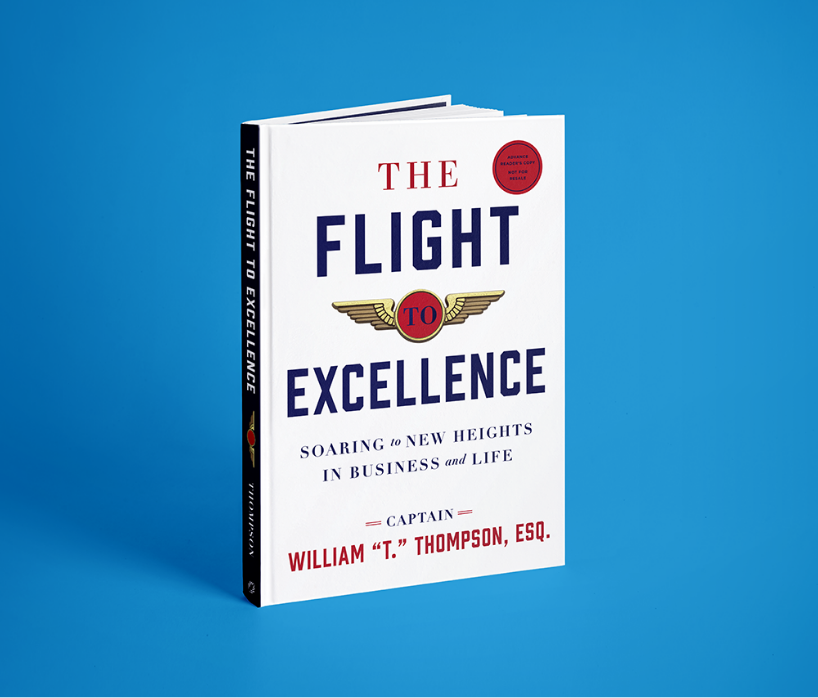 BUILD A CULTURE OF EXCELLENCE

An award-winning entrepreneur, major association CEO, attorney and international airline Captain, William "T" Thompson shares the straightforward process used to build a multi-million business, restructure a government agency and turn around a major non-profit association, taking it to new membership and revenue heights. Captain “T” brings his P4 system to help create a Culture of Excellence in your organization focused on long-term sustainability and financial success.
‍
He brings his lessons learned through personal experience to your group in dynamic and entertaining fashion.  His high-energy presentations are designed to create organizational and individual Excellence, focused on growing both your business and personal bottom line.

“…a true renaissance man with a profound message on the pursuit of excellence and achieving great success. We have already begun to implement aspects of the P4 model. Thanks for making our annual fall conference a tremendous success.”

Most importantly, Captain “T” uses the experiences gained through his eclectic career to help shape your organization’s culture, move it to a higher flight level resulting in a superior competitive advantage.
LEARN MORE

Looking for a consultation?
REQUEST A QUOTE
Captain “T” has used his personal process, the P4 model, as the basis for his continued and sustained success. More importantly, he has transported the model to both businesses and non-profit organizations with resounding success. Let Captain “T” share the P4 model with your company for high flying, accountable results. Click on the components of the P4 model below to discover how each aspect plays a crucial role in aiding the achievement of Excellence for both individuals, and organizations.

The word Principle is a homonym, which means it has two different meanings. On the one hand, a principle can be defined as “the way something works” and there are underlying principles of Excellence that need to be understood and applied to achieve both organizational and personal success.

The other definition of Principle is “values or an ethical standard. ” In a very real sense, your principles define who you are, the things that are important to you and what you will ultimately do. Ethical based principles are the underpinning for long term, sustainable achievement in both your professional and personal life. Integrity is the first of the core values at the Air Force Academy, my alma mater, and it is critically important to understand why it is the foundation for the pursuit of Excellence, the Academy’s third core value.

My mom used to tell me when I was a young boy; “Show me your friends and I’ll show you your future.” You’ll learn why your flight to Excellence requires the right people; ethical, positive thinking, intelligent, and motivated people as members of your flight crew.

We are all the Captains of our own lives, both professionally or personally and it is our responsibility to pick wisely when we can choose. We also have an obligation to nurture, mentor and take care of the people we lead. You don’t want to be the smartest person in your group because great leaders surround themselves with people who are smarter, better connected and more experienced than themselves. People are the most valuable resource in any business and bringing them together as one focused and unified team is the essential factor for organizational Excellence.

I have flown numerous Air Force missions, and millions of miles as an airline pilot but have never once taken off without knowing exactly where I intended to land. Likewise, it is critically important to look to the future and have a clearly defined vision about where the organization wants to go or where the team member wants to be rather than trying to figure out where the possibilities might lead.

Focus is critically important and you’ll learn the SOAR + T model of building a workable plan. Some things are too essential to try to commit to memory, which is why it is critically important to have your destination defined and the route detailed and written down. It is not by chance that in the aviation business, pilots follow detailed flight plans and written checklists even though they perform the same procedures every time they take off.

You’ve got solid Principles, have completed a great Flight Plan and have a talented and brilliant Flight Crew. Now you, the Captain have to take Action to execute yourFlight to Excellence. You have to push up the power, steer the jet down the runway, pull back on the controls and get that giant metal bird in the air. Once airborne, you’ll be able to pilot that jet to incredible altitudes and travel great distances to any point in the world.
‍
Achieving great heights and traveling far in business and life requires taking action, as well. Action is the jet engine that propels you or your organization toward achieving Excellence and accomplishing your goals. Of course it is human nature to procrastinate and I’ll show you and your company how to take action with a bias for maximum performance.

“Captain 'T', your presentation was truly outstanding and right on target. You gave us solid information in an entertaining yet commonsense manner, which has already, lead to measurable results in our group… Your speech received our highest scores.”

“Thank you, once again, for your invaluable contribution to our Senior Management Retreat… Without exception, all the feedback…has been extremely positive. Our staff leadership found your comments to be both insightful and visionary.

Thank you! Your submission has been received!
Oops! Something went wrong while submitting the form.